Explore an array of guitars with highly adaptable tone, innovative electronics, and a sleek, fast-playing feel.

Our electric guitars deliver the same rewarding mix of playability, tone and craftsmanship that players love about our acoustics. Proprietary Taylor pickups fueled the design of our current electric family, featuring three series, each loaded with player-friendly features: the groundbreaking hollowbody hybrid T5, the electric-leaning T5z, and the semi-hollowbody T3. 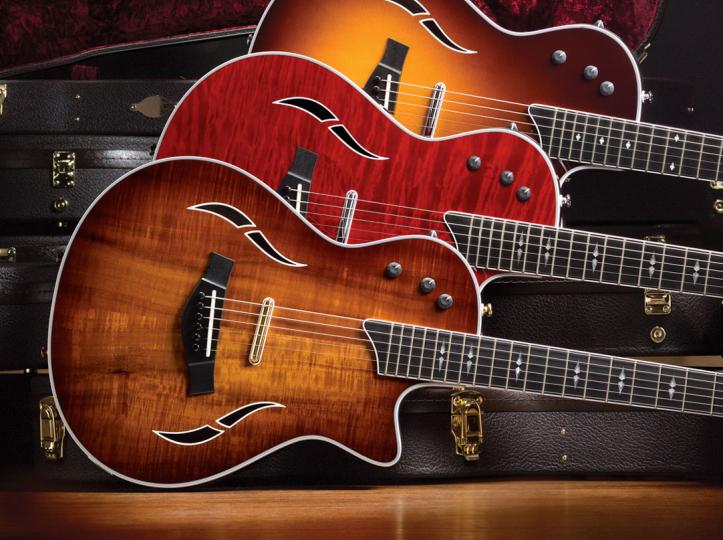 This younger electric/acoustic sibling of the T5 features a compact body and a setup that electric players will love. 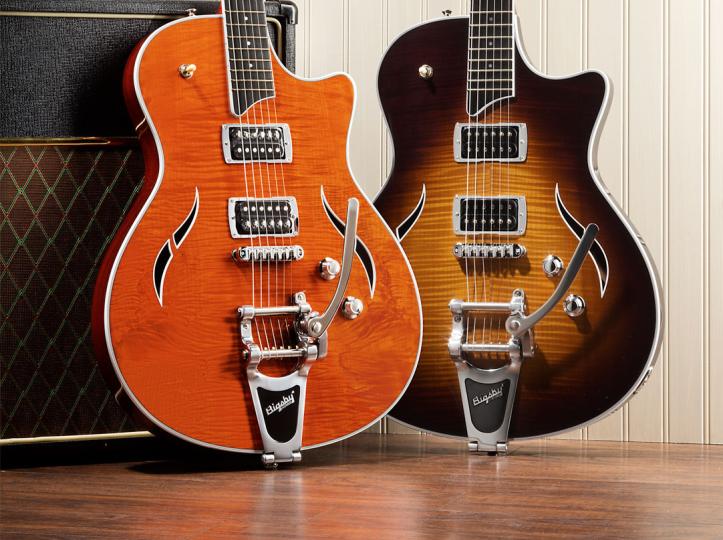 Our inspired take on the classic semi-hollowbody sound comes alive with amazing pickup flavors, plus coil-splitting and tone-shaping versatility. 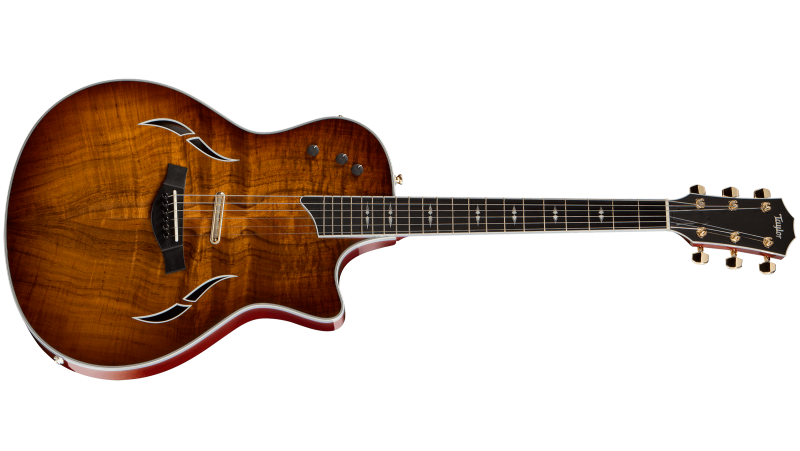 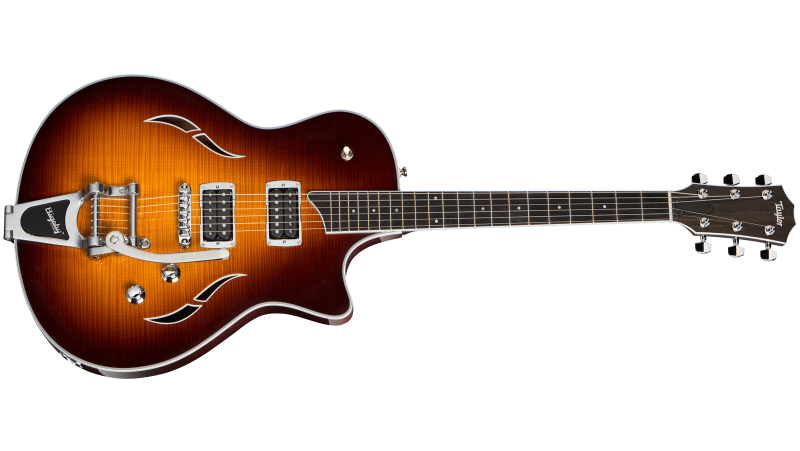 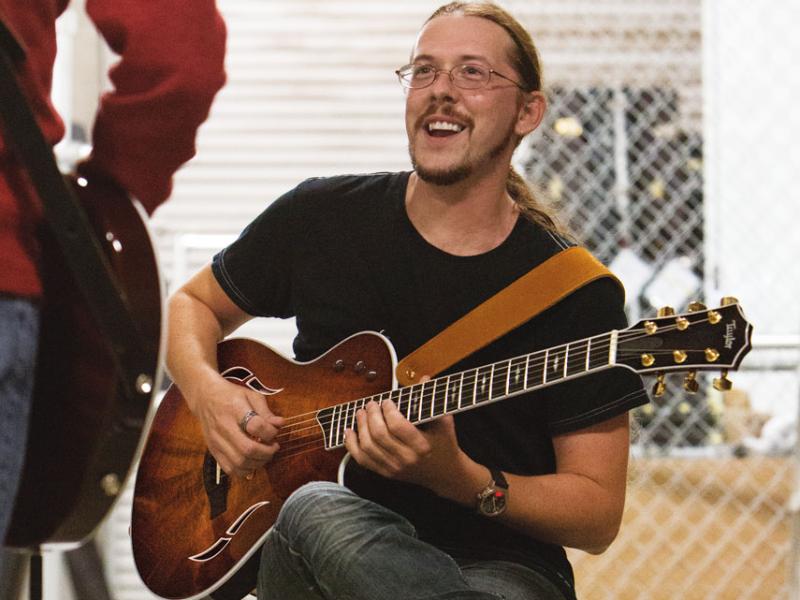 How to choose the right body, pickup configuration and more 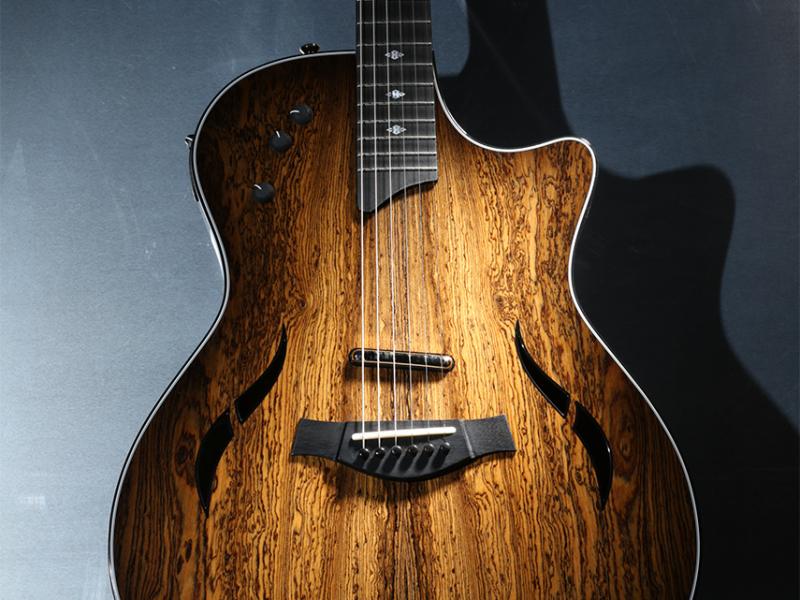 Design your dream electric through the Taylor Custom program

An Introduction to the Electric Guitar

It is hard to imagine modern music without the wide-reaching impact of the electric guitar. Easily one of the most versatile instruments ever created, it changed virtually every genre of music while creating entirely new genres, most notably rock and roll.
The need for a louder guitar became clear in the late 1800s as concert halls grew in size. By the 1920s, with the popularity of big bands, the acoustic guitar had all but faded into the background. There were many early attempts to augment an acoustic guitar to give it more volume. Lap steel guitars were the outcome of these early developments.

The patent for the first electric guitar was awarded to George Beauchamp and Adolph Rickenbacker for their Rickenbacker “Frying Pan.” Their patent included their key invention: the electromagnetic pickup. Using a coil of wire passed over a magnet, it turned power current into a field capable of amplifying vibrations.

In the 1930s and ’40s, jazz and blues guitarists were the first to benefit from the new sound of amplification. Charlie Christian and Django Reinhardt are among the jazz greats who adopted the electric guitar. In the 1950s solid body guitars were introduced as well as innovations like the tremolo bar, more advanced pickups, and effects.

The solid body electric guitar was a major design advance introduced by Leo Fender in the early 1950s. The solid body guitar helped remedy the feedback problems of hollowbody instruments. They were also easier to make, which led to mass market production. Fender introduced the iconic Telecaster and Stratocaster. Soon Gibson also introduced their first electric guitars in a partnership with Les Paul to produce what would become the equally iconic Gibson Les Paul.

While Taylor Guitars is most famous for our acoustic guitars, we are also proud of our line of unique electric guitars. We have the T5, our original hollowbody hybrid that bridges both worlds like no other guitar. Check out our T5z, the smaller hybrid with a compact body that electric players will love. And be sure to try the T3, our inspired take on the semi-hollowbody guitar with a sound that comes alive with amazing pickup flavors, plus coil-splitting and tone-shaping versatility.