After losing an arm, Jake’s guitar-playing days seemed gone. But not for long.

Jake McGehee fell in love with creating music at a very young age. “Jake was a musician before he was even born,” shares his father, Jimmy. “I think his love of music began in the womb!”

Growing up in central Oklahoma, Jake was immersed in his family’s musical pursuits. His dad and grandfather both played in a band, and Jake took to music himself, starting out on drums. “He was about three years old,” Jimmy boasts. “He’d get his momma’s pots and pans out of the cabinet, sit on the floor, and tap on them. When he got older we got him a drum kit for Christmas. He has a natural ear.”

Jake had an aptitude for picking up any instrument that was handed to him. “I didn’t pick up a guitar until I was probably 11 or 12,” he recalls. “Once I started, though, I just kind of locked myself up after school and played until dinnertime. I’d go eat, and as soon as I got done with dinner, I’d be right back in there playing until it was time for bed.” A self-taught musician, Jake studied his craft and often tried new instruments. “I love playing guitar,” he professes. “I love playing anything. It doesn’t matter. I could play the triangle.”

A determined and somewhat bullheaded young man, Jake showed a daring and perhaps reckless passion for pursuing the difficult. He never let hard work or fear of pain stand in the way of his goals, and spent some time as a rodeo cowboy just so he could have bragging rights. “I wasn’t ever really good at it,” he says, “but it was something that I was proud to say I could do. I finally took a pretty good accident one time. After that, I thought, ‘There’s safer stuff to do around here.’” 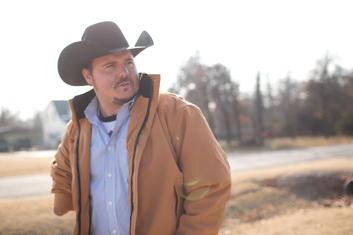 His determination to overcome adversity would be put to an extreme test later in life. One morning in May of 2012 Jake went to work for his employer, a company that provides survey instruments for oil and drilling companies. His task that day was to rebuild a “sub” that had been used to track whether an oil drill bit was drilling straight. It was something he was accustomed to handling, and he didn’t think twice before beginning to dismantle the unit in front of him. But this time things didn’t go right. As he was working to remove the two-and-half-foot-long lithium battery, it suddenly exploded, dousing him in toxic lithium that burned his flesh to the bone.

Jimmy remembers that day vividly. “When we got the call that there had been an accident, I dropped everything and ran out and grabbed his mom, Brenda,” he says. “I almost beat the ambulance to the hospital. He had acid on him. His brother, Justin, is a firefighter, and when we got up close, Justin just freaked out. Jake was black all over his face. We could tell he had been burned on his chest and his arm, but we didn’t know how bad it was, ’cause it was just black. That explosion blew Jake’s shirt clean off of him and spun him around. It was just like looking down the barrel of a cannon, and it went off in his face.”

Jake was so badly burned that the doctors put him into an induced coma for over seven weeks. This would help his body relax so it could repair itself. They feared that he had inhaled some of the lithium and that his lungs were burned, so one of the doctors created an inhaled treatment that could address the lung tissue directly. It was a procedure that had never been done before, and it worked. Though much of his body began to heal, Jake continued to have a severely high fever that signaled infection. Sadly, it was determined that his right arm was so badly damaged and septic that it would have to be removed.

“I remember waking up,” Jake recalls. “I knew at the time of the accident how bad it was, because I had gone through EMT training and I knew what the outcome could be. All I could do was pray that wasn’t the case. But when I woke up and noticed my arm was gone, I just thought, ‘Okay. We’ll see how this works.’ Playing music was furthest from my mind at that moment.”

Jake’s next step was a course of grueling physical therapy. “I’m very, very hard-headed and stubborn,” he says. “They kept telling me, ‘You’ll be in therapy a good 3-4 weeks.’ And I said, ‘No, I won’t!’ It was mid-July when I woke up, and I walked out of the hospital August 1.”

In addition to dealing with the pain of recovery, Jake now had to face the loss of his ability to pursue his passion for music.  Jake’s guitar playing days were over, or so he thought. “We were just hanging out in the shop one day, and my buddy asked me, ‘What would it take to get you to play?’” Jake recalls. “I was like, ‘I have no idea. Grow an arm?’” They got to talking and decided to see if they could make the impossible happen.

With parts they found around the room, they worked to put together a prosthesis that could hold a guitar pick. After several tries they found a configuration that they thought might work. “I tried it for 5 or 10 minutes,” Jake says. “I was playing songs and trying to figure out what I needed to do to make it work — to make it sound clear and not just a bunch of mess.” He started practicing more and more.

The next step was to get a real prosthesis made that would enable Jake to steadily hold a guitar pick so he could really re-learn how to play. After several failed attempts and a variety of designs, a doctor in Houston finally got it right. “I was glad,” Jake remembers. “I never thought I would play lead. I thought if I could just sit down and strum a song I would be happy.”

Jake worked on getting his chops back. Soon he was able to master the movements required to play rhythm and then lead guitar. “I’m having to re-learn and figure things out in a different way,” he says. “I normally would play a kind of a chicken pickin’ style, using spare fingers as well as a pick. Now I have to figure out how to get things down without being able to do that. It’s a challenge all over again, but it’s a good challenge. It’s not like it really frustrates me or anything. At least not yet.”

His brother, Justin, encouraged him to play live, but Jake was terrified to take the stage. He feared the worst. Not that he couldn’t face the crowd, but that he couldn’t meet his own expectations for himself. Could he play on stage and be as good as he was before? Could he think of himself as not just a pretty good one-armed guitarist, but as a great guitarist, period? Jake feared the answer would be no.

Justin decided a sneak attack was necessary. He invited Jake to a party for his brother-in-law, and when he arrived he found a full backline and his bandmates raring to go. But Jake was nervous. Justin urged him on. “You’re going to do this, and you’re just going to get over it,” he told him. “We don’t have to play all night. Let’s play a little bit, and if you get tired, we’ll shut her down.” Jake was shaking. He didn’t know what to do. He stepped up on the stage and started with something easy.

Jake ended up playing all night. A full four-hour set. Now Jake is back with the Jake Adams Band and has played several live shows over the last six months. “Every time I’d pick up the guitar, I figured something else out, and it just keeps me going,” he shares. “I’ve had chances to open for some big names in my life and I told myself, ‘If I can get to that point again, whether I ever go any further or not, at least I can say, hey, I play like I used to.’ And that’s what I’m working on.”