Nancy had a lot to say. She just couldn’t say it. Until she picked up a guitar.

Nancy had a rough time in school. She was often teased and bullied because of a speech impediment she’d had as far back as she could remember. The other students were often merciless. “It’s pretty hard to have a problem with your speech,” Nancy shares, “because when you try to talk to people, they make fun of you if your speech is off.”

One day in seventh grade things began to change. Nancy was given the opportunity to take a guitar class when her middle school was adopted into the Little Kids Rock music program. Her teacher, Rodney Dittmar, explains. “I’d already had a guitar class at the school since 1999,” he says. “For a while we were the only school in the district that had a guitar class. Then we became involved in the Little Kids Rock program, and it was so refreshing to see these other schools start teaching guitar. It really validated what we were doing.”

Little Kids Rock, a non-profit organization, offers a guitar-focused curriculum and often supports school programs with instrument donations and special guest artist appearances. Its goal is to make guitar playing and music making more accessible to students all over the country.

Though Nancy was shy and tried to stay away from the spotlight, she simply couldn’t resist the guitar. “It reminded me of my father,” she explains. Her dad had passed away when she was only 7. She recalls with fondness that her father played guitar, and says she felt a bond with him when she played. “Guitar was something that I loved from the start, but at first I wasn’t very good at it,” she remembers. “I didn’t get very good until after a few years. “My teacher, Mr. Dittmar, always pushed me and helped me.” 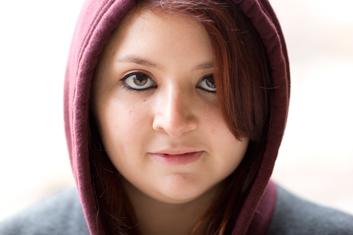 Part of the school’s guitar program focused on songwriting and featured a competition for all students, challenging them to write a song and share it with the class. Nancy penned her first song. “It was a very simple song,” she recalls. “It just had G, A and C. I think it was called ‘The Unknown.’ “When I was done I was very surprised!”

Mr. Dittmar recalls that Nancy took to songwriting right away. “Nancy’s been through a lot in her young life, more than most people, including losing her father at a young age and a lot of other things,” he says. “She’s got a story to tell. That plus the fact that she was so quiet for so long, because of her speech problems. She had so much to say, but saying it wasn’t easy. She found out that through music she could do that. To my knowledge, the first time Nancy ever sang was in my office by herself with a tape recorder. I listened to it later and was just blown away. When she speaks she has a speech impediment, but when she sings it’s fluent and clear! So she started writing and singing her own songs, and it just turned into something really beautiful.”

After hearing the very first song that Nancy wrote, Mr. Dittmar encouraged her to sing it for the class. “Every year, Little Kids Rock does a songwriting exhibition,” he says. “I encourage everybody to enter, and Nancy has several times. The first time she did, I was surprised. I saw the lyrics, and they were really, really good. She was going to have another kid sing them. And I told her, ‘This is kind of personal. This is your story. You oughta tell it.’” Nancy was apprehensive about singing in front of an audience, but Mr. Dittmar’s encouragement helped her find a way to do it.

“I just went onstage and I performed,” Nancy reflects.  Not only was she surprised to find that she could write beautiful songs, she realized that when she sang there was no stutter. Her voice flowed smoothly through the entire performance. “When I sing,” she says, “I feel like I can be flawless.”

Nancy credits Mr. Dittmar for giving her the courage to step into the spotlight. “He really helped me, because I was very nervous,” she says. “He was there for me, and he told me that I could. I wasn’t really used to people telling me that I could do it.”

See how it works »

Now a senior in high school, Nancy has had a chance to sing at many events, including a concert at the House of Blues with a group in front of big crowds. With songwriting she has truly found her voice, and has gone on to write more than a hundred songs. Mr. Dittmar says he feels fortunate to have been her teacher and see her blossom through the program. “It’s just really phenomenal how somebody who has been through some of the things she’s been through can take that and funnel it into a positive.”

This past spring Nancy participated in the district’s jam summit, a big event in which all the schools that offer the guitar program get together. There are workshops with the students followed by a big concert at the end, and every group takes a turn. Mr. Dittmar points out that when one of the instructors was running late for a workshop, Nancy stepped in and taught it. “She got to help these younger kids, and it was a really beautiful thing to watch,” he says. “That’s an example of how comfortable she’s become at this.”

Nancy has found new ways to face her fears, both in life and in performance. “It’s been very scary up until recently,” she admits. “Then a friend of mine told me, ‘When you sing a song, pretend like it’s an encore,’ and it helps. It fills me with confidence to think that people want more.”

Nancy dreams of being a songwriter and a recording artist, and she’ll continue studying and working on new music.